Internal combustion (IC) engines are most common in our daily life used vehicles. These are the most efficient and high-performance engines. The IC engines have multiple types, and a diesel engine is one of them. A diesel engine is also known as a compression ignition (CI) engine.

What is a Diesel Engine? A diesel engine has more efficiency than other internal combustion engines (i.e., petrol engines). This is because it has the highest inherent lean burn and expansion ratio, which makes the heat to be dissipated by the excess air.

These engines have two types which are 4-stroke and 2-stroke diesel engines. These types of diesel engines were utilized in place of a stationary steam engine to improve the performance.

In 1910, these engines were depleted in ships and submarines. After some time, they have been used in applications like electricity-making power plants, agricultural equipment, heavy apparatus, trucks, and locomotives.

In the 1970s, diesel engines were most commonly used in larger off-road and on-road vehicles.

A low-speed CI engine (used in applications where the overall weight of ships and other engines is relatively light) can achieve effective efficiency of up to 55%.

After working many years, Diesel published his ideas about diesel engine in 1893 in the essay “Theory and Construction of a Rational Heat Motor.”

Rudolf Diesel, when he invented the diesel engine, a compressor lighter had been used as an effective and efficient way to burn the engine.

Diesel used oils such as vegetable oils to invent his first engine as he had no formula for diesel infrastructure at that time. The very high compression ratio was used to generate the high pressure and high temperature required for automatic combustion. It was the main feature of the compression ignition engine.

A method of injecting fuel directly into the combustion chamber was also required. Over time, the infrastructure of oil pollution became fuel such as gasoline (to support gasoline engines), petroleum and fuel oil (boiler room), and diesel oil.

The diesel cycle completes a power stroke in two or four strokes of the piston. An explanation of the Diesel engine cycle working is given below with the help of T-S and P-V diagram: A compression ignition (CI) engine or diesel engine has below given major components:

The fuel system has a separator, injector, fuel pump, fuel rails, fuel pressure regulator, fuel injection pump, and many other units. This system also has fuel filters used to filter the fuel and make it free from dust and other dirt.

This part of the diesel engine uses to stops the poor-quality fuel from engine failure.

The filters play a vital role in the safety of the engine. They filter the fuel and remove dust and other contamination from the fuel. In this way, it also extends the engine life.

A turbocharger allows the engine to suck more air into the combustion chamber and increases the horsepower of the engine.

It uses to decrease the intake air temperature.

The lubrication system has the following major purposes:

In the oil lubricating system, the various parts of the diesel engine lubricate under a high-pressure supply. This oil for lubricating the engine parts is stored in an oil sump. An oil pump uses to pump the oil and transfers it into a filter.

After bearing lubrication, some amount of the oil goes back into the sump, some oil is used to lubricate to the cylinder wall, and the left-over oil goes into the crankpin. The oil lubricates the piston ring by flowing from the crankpin to the piston pin through connecting rod’s hole.

The engine cylinder surrounds via a water jacket. This jacket has water that absorbs heat from the cylinder.

The water-cooling method has three types:

A diesel engine has high efficiency because of its high compression ratio. The lack of a throttle valve means very little air exchange loss, which consumes less fuel, particularly at medium and low loads. Due to these reasons, diesel engines are very economical.

According to Rudolf Diesel, the actual productivity of a diesel engine should be from 43.2% to 50.4% or more.

The maximum efficiency of a diesel engine is about 55%, which can achieve with a large 2-stroke marine diesel engine.

The compression stroke and power stroke of the diesel engine are reversible adiabatic. Therefore, the efficiency of the Diesel cycle can be measured from the constant volume and constant pressure processes. The below-given formula can calculate the efficiency of the Diesel cycle:

As we discussed that, The compression ratio (r) is given below:

Cut-off ratio is given below:

The expansion ratio is given below; So, in the case of adiabatic compression (4-1),

In the case of the adiabatic expansion (2-3), The diesel engine has two major types that are:

The 2-stroke diesel engine is a type of compression ignition engine that completes a power cycle in only two strokes of the piston.  It ignites the fuel due to the high compression of fuel.

It completes a power cycle after two revolutions of the crankshaft or four strokes of the piston. You can find these engines in heavy vehicles like buses, coaches, tractors, cars, etc. 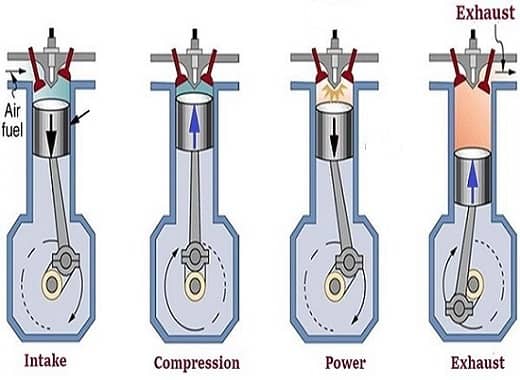 Advantages and Disadvantages of Diesel Engine

Advantages and disadvantages of the diesel engines are given below:

The diesel engines have a high capability to move heavy weights because they produce more torque than petrol engines. Therefore, diesel engines are most commonly used in heavy-load vehicles.

What are the problems with diesel engines?

Diesel engine works on which cycle?

A diesel engine works on the diesel cycle.

What are the types of Diesel engine?

A diesel engine has the following two major types:

What are the parts of a diesel engine?

The diesel engine has the following parts:

Do diesel engines have spark plugs?

A diesel engine doesn’t have a spark plug. The reason is that, in this engine, ignition occurs due to the high compression of air.

Who invented the diesel engine?

Rudolf Diesel discovered the diesel engine in the 1890s.

What happens if you put gas in a diesel engine?

Diesel fuel is designed in such a way that it doesn’t require any external heat source (such as a spark plug) for ignition, while gasoline fuel can’t ignite without a spark plug. Therefore, if you put gas into your diesel engine, your engine will not ignite it, and the engine will not start.

The diesel engines are most widely using all over the world. The reason behind their popularity is that these are more efficient than petrol engines. These engines are using to power different heavy vehicles as well as to power industrial heavy machinery.

The CI engine consumes less fuel as compared to a petrol engine. So, the diesel engine has high power and speed than the SI engine. But these engines have a high cost as compare to petrol engines.