A fuel system or fuel injection system is a mechanical system that delivers the proper amount of fuel to the engine. The fuel system comprises the carburetor, fuel filters, fuel pump, fuel lines, and fuel tank. The fuel system should work properly for the proper operation of the vehicle. Therefore, you must clean the system properly. In the previous article, we discussed how to use fuel system cleaner. This article mainly explains the fuel system working, types, parts, and function.

What is a Fuel System?

The main function of the fuel system is to take fuel from the storage tank and deliver it to the engine combustion chamber, where it mixes with air, vaporizes, burns, and generates mechanical power.

The fuel system consists of an injector, pump, filter, fuel tank, and carburetor. The proper working of all these parts is very important to achieve the desired performance of the vehicle.

A fuel storage tank uses to store the fuel, which can be either gas, diesel, or petrol. When the engine needs fuel, a fuel pump takes fuel from the fuel tank, passes through the fuel lines, and transfers it into the carburetor.

Fuel injection system is the part of the vehicle that is responsible for the proper supply of fuel to the engine. A fuel system works in the following way: Watch the below given video for better understanding:

The fuel system has the following major types: The main disadvantage of this system is that it is less efficient and less precise than the multi-point unit.

The main difference between a sequential injection system and a multi-point injection system is that in the case of multi-point fuel injection, all injectors inject fuel at the same time. This means when the engine is idling, fuel typically remains in an orifice for more than 148 milliseconds. It may not seem like a long time, but actually, this is enough time to reduce efficiency.

While in the case of the SPFI system, all injection nozzles don’t inject fuel simultaneously, and each nozzle injects fuel according to the corresponding cylinder requirements. These nozzles inject fuel just before the opening of the inlet valve. That means the fuel doesn’t have to stay long. Therefore, this system increases efficiency and reduces emissions rate.

This is one of the most simple and innovative type of injection system. This system injects fuel directly into the combustion chamber after opening the valves. Direct fuel injection systems are most commonly used in diesel engines but have recently become popular in petrol engines as well.

For example, the Hyundai Venue’s 1.0-liter turbocharged petrol engine uses a direct-injection system sold as the “GDI.” In this configuration, fuel preparation and injection timing are superior than any other injection system.

The fuel system has the following major parts: 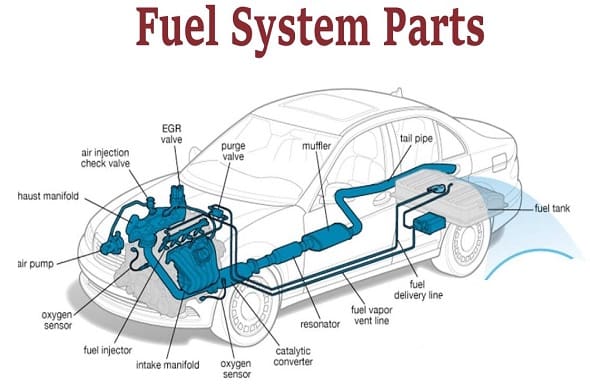 The fuel pump has the following major two types:

A fuel injector uses to inject the fuel into the combustion chamber of each throttle body or each cylinder. Actually, a fuel injector is a nozzle with a valve that creates a spray of fuel and air droplets.

A carburetor is most commonly used in the petrol engine. The main function of this part of the fuel system is to make an air-fuel mixture. The fuel filter plays a big role in the proper operation of the fuel supply system. Due to the tight tolerances of fuel injectors, they can be damaged very easily by debris, and fuel-injected vehicles also use electric fuel pumps.

Do not use copper or aluminum when repairing or replacing steel fuel lines. You must replace the steel lines with steel. Similarly, when you replace the flexible rubber hose, you must use the correct hose. When you are replacing, carefully disconnect all hoses from the exhaust system.

You can see the fuel gauge on the dashboard of your car. It is connected to the fuel tank. It uses to show the driver an actual fuel quantity in the tank.

In traditional vehicles, the fuel gauge couldn’t show an exact amount of fuel in the fuel tank. If this is your first time driving a classic car, take the time to understand the precision of the system. This part of the fuel system eliminates the hassle of running to a gas station when your tank runs out of gas!

In the case of a fuel system, it is probably your biggest concern. The sending unit is a flawed design at best. This unit is most precise between 1/4 and 3/4 of the gas in the tank. Even if the tank limit (full or empty) is reached, the display becomes less accurate.

These controls use in combination with fuel return lines. This part of the overall system uses to prevent petrol vapors from being discharged into the ambient air. When this happens, following some bad things can happen:

This unit of the fuel delivery system makes sure that the system properly maintains a proper amount of pressure. The fuel pressure regulator unit is most commonly used in fuel-injected vehicles because fuel injectors generate more pressure than carburetors.

What is a Fuel Injection System?

A fuel injection system is a vehicle part that delivers fuel from the fuel tank to the engine combustion chamber.

What is the function of Fuel system?

The main function of the fuel system is to store fuel in a fuel tank and deliver fuel to the combustion chamber of the engine, where it mixes with air, compresses, vaporizes, and burns to generate desired mechanical power.

What are types of Fuel Injection Systems?

The fuel injection system has the following major types:

What is a Dual Fuel System?

The dual-fuel system is a home comfort system that combines an electric heat pump and a furnace, alternating between two sources of fuel to maximize comfort and efficiency.

What are the Fuel system parts and function?

The fuel system has the following major parts and function: