What is Oil Cooled Engine?

As the engine heats up, it transfers heat to the oil, which then usually passes through a heat exchanger, typically a type of radiator known as an oil cooler. The cooled oil flows back into the hot object to cool it continuously. 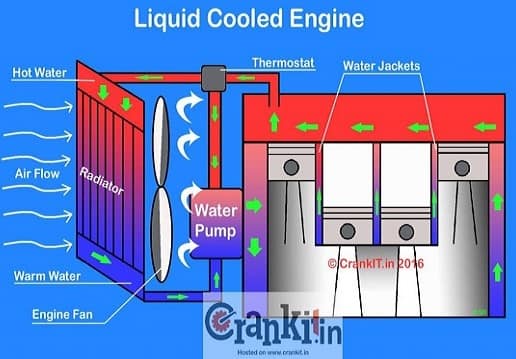 The benefits of this method are greater than simple air cooling. In addition to being cheaper, it is easier to maintain and technologically simple. The liquid cooling system is not as efficient as the high-performance engine cooling system.

The oil cooled engine works on the thermodynamics principle. The engine oil is taken out of the engine through an oil tube connected to the oil cooler outside the engine.

The flow of air is achieved due to the forward motion of the vehicle. As the oil loses heat, it becomes cooler and also retains its viscosity.

The oil cooling process helps to improve engine performance. It has longer service intervals and reduced wear and tear of engine components.

The oil-cooled engine is typically used in entry-level performance bikes such as sports bikes, cruisers, adventure tourers. This engine tends to have lower lube oil consumption due to the effective cooling of oil outside the engine.

What is an Oil-Cooled Engine used for?

Oil cooling is commonly used to cool high-performance motorcycle engines that are not liquid-cooled. Typically, the cylinder barrel remains air-cooled in the traditional motorcycle fashion, but the cylinder head benefits from additional cooling. There is already an oil circulation system available for lubrication; this oil is also piped to the cylinder head and used as a liquid coolant.

Compared to an oil system used solely for lubrication, oil cooling requires additional oil capacity, a greater flow rate through the oil pump, and an oil cooler (or a larger cooler than normal).

But if the engine is a racing engine that always produces huge amounts of heat, water, or liquid, cooling may be preferable.

The oil cooled engines have the following major components:

Advantages and Disadvantages of Oil-Cooled Engines 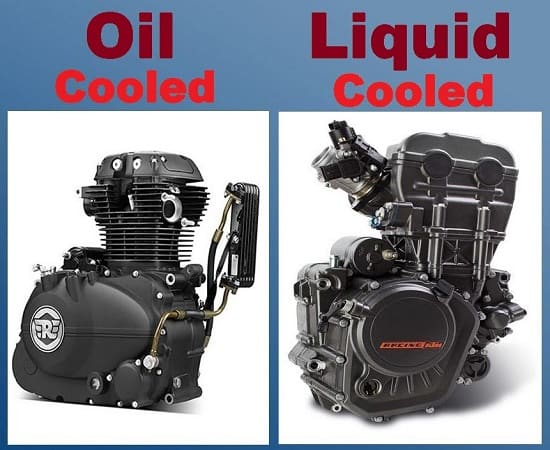 Which one is better, liquid cooled or oil cooled?

Where is Oil Cooler located?

Oil coolers are typically installed on the exterior of the engine and in the automobile front to improve airflow. The oil cooler also connects to the cooling fins, increasing the effective surface area of ​​metal in contact with the air.

The larger the surface area in contact with the cold air, the more heat is dissipated—the higher the airflow rate, the higher the heat dissipation rate.