Automobile’s electrification issues need to be addressed in order to decrease dependency on fossil fuel and comply with future emission policies. However, pure-electric automobiles still contain numerous drawbacks. Therefore, the hybrid automobiles are the best transfer option. The hyper-expansion cycle engine (Atkinson or Miller) is ideal for hybrid automobiles.

What is an Atkinson Cycle?

The Atkinson cycle engine is a type of IC engine. An Atkinson cycle is mainly designed to improve the 4-stroke gasoline engine’s efficiency by one particular improvement. In simple words, the this cycle is invented to take advantage of the power generating portion of the cycle while minimizing fuel consumption during the suction stroke.

In 1882, an engineer James Atkinson invented the Atkinson cycle.

Although the four basic phases of the Otto cycle still exist, Atkinson launched a new timing order for the suction valve shutting during the compression stroke. Leaving the suction valve open a little longer efficiently reduces engine displacement during the suction process but maintains the maximum expansion ratio during combustion or the expansion stroke. This makes the engine to extract maximum energy from the ignited air-fuel mixture before leaving the mixture to the chamber.

The Atkinson cycle engine has the following major types:

Firstly, the Atkinson cycle was implemented in 1882. 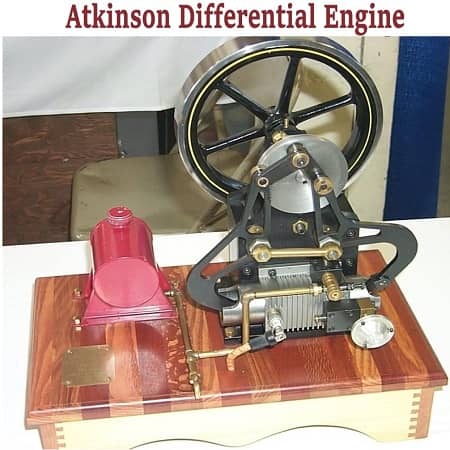 In contrast to the advanced version, this cycle was implemented as an opposed piston engine (the Atkinson differential engine). In such case, a single crankshaft was linked with two opposing pistons via a non-linear connecting rod.

Therefore, for each revolution, one piston of the Atkinson differential engine delivered the compression and power strokes while the other piston delivered the exhaust and suction strokes.

In 1887, Atkinson invented another engine that was called as “cycle engine.” It had a cam, poppet valves, and an eccentric arm to generate four strokes of the piston for each turn of the crankshaft. The Atkinson cycle of this engine had a shorter suction stroke and compression stroke than the power stroke and discharge stroke. The “cycle engines” were manufactured and sold by UK engine manufacturers for many years. Atkinson was also given production permission to other companies.

Atkinson was designed 3rd engine that was known as the “Utilite Engine.” The 2nd engine (Cycle” engine) of Atkinson’s was effectual, but it had a linkage that was very hard to balance for quick working. Therefore, Atkinson felt that he should perform modifications to make his cycle more suitable as higher-speed engines.

After improvements in the previous model, Atkinson designed a new model that was “Utilite Engine.”  In this new design, he had eliminated the connecting rod and created a more balanced, more traditional engine that could run at a speed of approximately 600 rpm and generate power at every revolution. His “Cycle engine” had a proportionally longer expansion stroke and a shorter compression stroke.

The operation of the Utilite engine is very similar to that of a standard 2-stroke, except that the exhaust port is in the center of the stroke.

In this design, a cam functioned valve (which doesn’t open until the piston approaches the stroke end) in the power stroke to stop backflow of the pressure as the piston passes through the discharge valve. This discharge valve opens when the piston reaches near the bottom of the stroke.

When the piston returns for a compressed stroke, the exhaust valve remains open, and fresh air fills the combustion chamber and expels exhaust gases until the discharge port is enclosed with the piston.

As the discharge or exhaust port closes, the piston starts to pressurize the remaining air in the combustion chamber.

A small fuel pump injects fuel during the compression process. The source of ignition was hot tubes like other Atkinson engines. This construction provides a 2-stroke engine with long power and short compression strokes.

Why do we need to reduce the compression ratio for the Atkinson cycle?

In the Otto cycle, after the combustion process, the force exerted on the piston during the power stroke increases so that when the piston reaches BDC, the exhaust valve opens, and useless heat discharges from the combustion chamber.

Therefore, this cycle uses to reduce the compression ratio for more expansion during the expansion stroke so that the entire force generated due to the combustion process can be used on the piston before the piston reaches BDC.

Efficiency of the Atkinson Cycle

The efficiency of the Atkinson cycle can be calculated by the below-given formula:

In the above equation, the work done by the system is calculated as:

In the above equation:

QR = Heat rejected by the system

QS = Heat added to the system For the isentropic compression processes (1 to 2): For the Isochoric compression process (2 to 3): Why is Atkinson cycle more efficient?

The Atkinson cycle is more efficient because it has a large expansion ratio than compression ratio.  It delays the closing of the suction valve until the piston completes 20% to 30% of the upstroke during the compression stroke.

What is the biggest engine in the world?

Wärtsilä RT-flex96C is the biggest engine in the world. The Wärtsilä RT-flex 96C is a turbocharged 2-stroke piston diesel engine that was developed to drive large container boats.

What cars use the Atkinson cycle?

The following cars are used the Atkinson engines: